Ferretti Group and David Beckham’s Fund for UNICEF come together for the children of El Salvador.

A fabulous Riva Anniversario special limited edition will be auctioned off to the most generous bidder: the entire proceeds will go to support the UNICEF 7 Fund for the children of El Salvador. 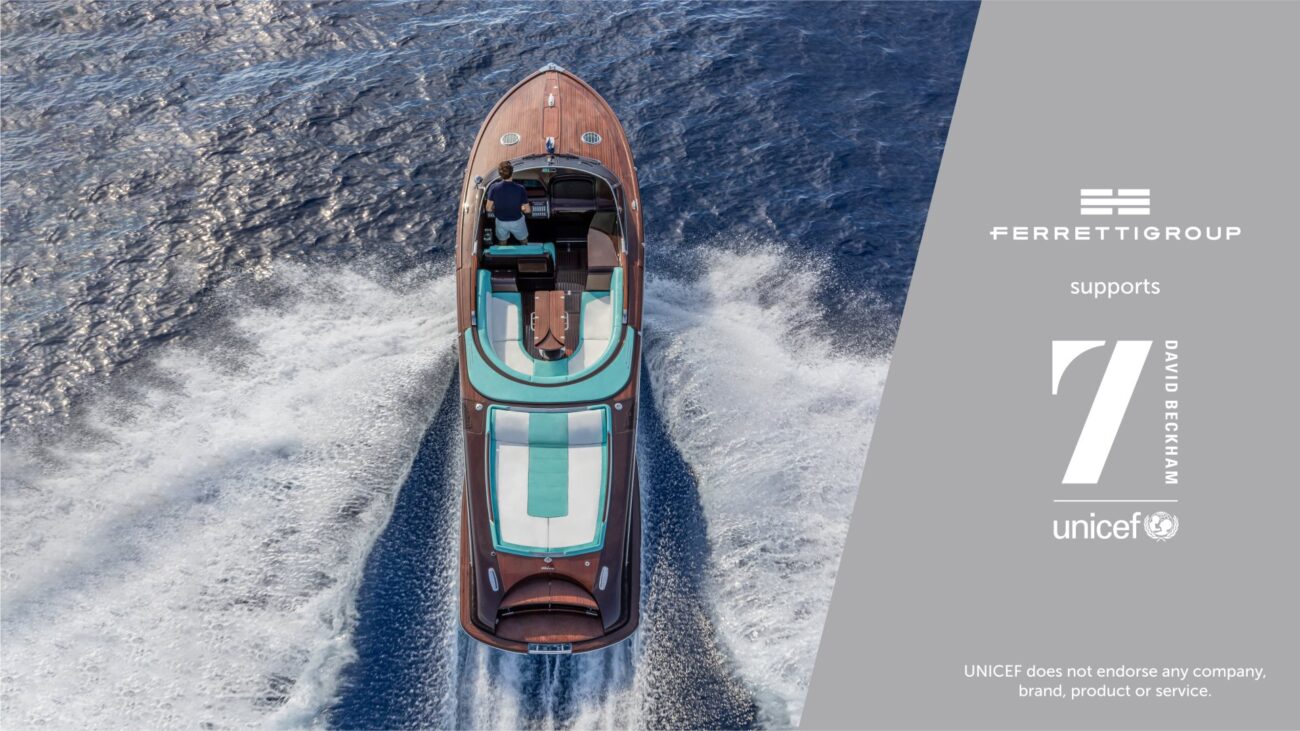 The David Beckham UNICEF Fund and Ferretti Group have come together for a charity auction, where a magnificent, limited edition Riva Anniversario boat will be auctioned, and the entire proceeds will help protect children in El Salvador whose lives are threatened by violence.

The collaboration springs from David Beckham’s role as a Goodwill Ambassador for UNICEF, a role he has held since 2005. UNICEF works to save children’s lives, defend their rights, and to help children fulfil their potential in almost every country on Earth.

To mark his 10 years as a Goodwill Ambassador, David set up the 7 Fund with UNICEF, to support children around the world by providing better health care, education, and protection.

In El Salvador, the 7 Fund is working in the six most violent areas to help prevent and respond to acts of violence against young people. The goal is to help children go to school, to make public spaces safer and child friendly, and to strengthen child-protection services and make them more accessible.

The 7 Fund aims to provide every child in these six areas with the chance to play sport in safety, so they can develop resilience and learn vital life-skills.

Ferretti Group is committed to supporting David Beckham’s 7 Fund for UNICEF: a magnificent Riva Anniversario will be auctioned off, and the entire proceeds will be donated to safeguard children in El Salvador.

“I am so proud of my work with UNICEF. As a Goodwill Ambassador and founder of the 7 Fund, I have seen first-hand the vital work that UNICEF does around the world. UNICEF is there every day in homes, schools, and communities, helping children realise and fulfil their potential. I am so pleased to see how we are helping children in El Salvador. The projects we support there protect the many children who live in the shadow of violence. Thank you to the Ferretti Group for supporting this cause, which is so close to my heart.” said David Beckham.

Riva Anniversario is the special, limited-edition boat created by Riva to celebrate the shipyard’s 180th anniversary as well as 60 years of the iconic Aquarama. Only 18 units will be made, and one has been immediately earmarked to support the 7 Fund for UNICEF’s work. This will raise vital funds for El Salvador’s most vulnerable children and raise greater awareness of their situation and the work that UNICEF is doing for the most disadvantaged children and adolescents.

“All of us who sail the waves know that there is a law of the sea that we all hold dear: that you must do all you can to rescue those in danger who need help”, commented Alberto Galassi, Ferretti Group CEO. “I am grateful to UNICEF and to our friend David Beckham for this chance to support a project that can make a real difference to the lives of thousands of children and their families. There is no better way to celebrate Riva’s 180th year, and I am certain that our owners will be eager to compete for such an exclusive, iconic boat while offering hope and opportunity to so many people.”

To join the auction and find out more, head to www.ferrettigroupforunicef.com. The silent auction will be open for four months, concluding in Miami on 16 February 2023, when the Riva Anniversario will be handed over to the most generous bidder.